The diversity of Amazon Rainforest fruits available to try in the region is fantastic. Many tours show guests new and novel fruit locally used, and you are sure to find exotic varieties at fruit and juice stands dotted around your base town. Some fruits you will be familiar with, but may not know they originated in this part of the world. Others you will probably not know existed, and many are the ghosts of now extinct mutualisms after their ancient, giant dispersal mammals went extinct. I’m first going to mention some of the fruit in the Amazon Rainforest and will then say something about these giant animals of the past, the ancient megafauna.

You are probably familiar with passion fruit from Passiflora edulis but may not be familiar with the flowers from the Passiflora plants these fruits grow from. Ripe when wrinkled, the juice is used as flavoring for a wide range of desserts and juice. Immature fruit of these plants are cyanogenic, meaning they produce cyanide containing compounds so make sure they’re ready to eat. In their natural range, the juice is used to treat a range of conditions from headaches and alcoholism to nerve pain and cancer.

The fruits commonly eaten belong to the Passiflora edulis plants but there are around 600 different species within the genus. The purple fruit is native to southern Brazil and the yellow form (P. edulis flavicarpa) is thought to be native to the Amazon region. The yellow passion fruit is sweeter and less tart than the purple passion variety.

This small tart citrus fruit is a favorite flavoring and juice in the Amazon Rainforest. Reserves like the Pacaya Samiria National Reserve near Iquitos in north Peru have sustainable harvesting programs for camu camu, and you are sure you see it in markets in your Amazon base town. The Pacaya is a flooded forest and if you visit in the wet season you will see fruiting plants.

Known locally as guanábana in the Peruvian Amazon, which also refers to another species (Annona muricata), this fruit belongs to the Annona montana tree which grows in Central America and the Amazon Rainforest. It is thought to have originated in the Amazon. These fruits are not considered as nice as the guanábana fruit belonging to Annona muricata. It is used in traditional Amazon medicine to relieve parasites, treat diabetes and to help with coughs.

A relative of cacao (coming up next), the cupuaçu is from the tropical rainforest tree Theobroma grandiflorum. Its flesh has a fruity chocolate flavor. These fruits are used in the confectionary industry in both northern and southern Brazil. The fruit flesh can be eaten raw and is used in different drinks, juices, yoghurts, ice creams, sorbets, jams, and preserves. Because of its very close relation to chocolate, this fruit can be turned into chocolate-like products and replaces chocolate in things like chocolate drinks. Cupuaçu is also made into cupulate, a product that looks and tastes like chocolate but has a higher resistance to heat.

I’m sure you’re familiar with cacao, the key ingredient in chocolate, but you may not have known it is native to the Amazon Rainforest. The cacao trees (Theobroma cacao) are native to deep tropical forests in South America and the beans hang as pods (photo in header image). The Spanish conquistadors encountered cacao at the court of Montezuma (ruler of the Aztec empire in modern day Mexico) as chocolatl is reportedly one of the only beverages he consumed. He ritualistically drank the beverage before entering his harem. Chocolatl was a mixture of honey, cacao and vanilla beans. This was given to the king in a golden goblet and was consumed with a tortoise-shell spoon. Long before the Spanish invaded, cacao was cultivated by indigenous groups and traded between different people from Ecuador to Mexico. When ripe, the cacao pods range from yellow to green and deep red.

Fruits are a plant’s way of dispersing seeds. Tied into the web of life, animals find the fruits delicious as they provide nutrients and carbohydrates. Plants invest this energy as after animals gorge themselves on juicy fruit, they move from the parent tree and disperse seeds in their droppings. Because this has been beneficial to plants, it has resulted in a high diversity of different fruits with a wide range of different flavors.

Just like the fig wasps mentioned in the Amazon Rainforest trees article, some plants use particular dispersal agents like a particular mammal group and these animals co-evolve in a tight relationship. But what happens in these relationship when the dispersal species goes extinct? Well, then you are left with a plant that produces fruits nothing in its native range can disperse and they fall to the ground and rot, or living animals take the seeds but don’t appear to distribute them effectively, or introduced animals take over the dispersal role.

Some seeds in the Neo Tropics are too large for deer or tapir to eat, the largest terrestrial herbivores in South America that only recently descended the continent, which begs the question of what originally dispersed them? Enter the giant sloths, 18 feet tall and heavier than Africa’s elephants, smaller ground sloths, mastodont forest elephants, rhino-sized toxodons, extinct horses, peccaries twice the weight of living species and more. You may be more familiar with these fruits than you realize. Avocado (native to Central America), for example, with its large seed would need to be swallowed whole for effective dispersal.

What native animal does this today? Avocados are a ghost fruit, an anachronism as it’s scientifically called. Occasionally a jaguar will eat avocado and disperse the seeds or an agouti will bury the fruit, but the avocado did not evolve over millions of years to suit these poor dispersers. Other seemingly obvious anachronisms are the large bean pods like Cassia grandis (see photo) and Enterolobium cyclocarpum.

What are your favorite Amazon Rainforest fruits? Have you tried any that aren’t listed here? What did it taste like? Leave your comments below. 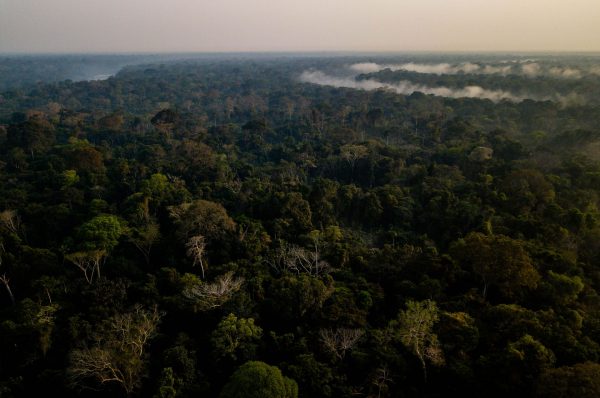