Of course, it’s the trees that really are the Amazon Rainforest. Trees create the right temperature, amount of sunlight, and micro-habitats for forest animals and plants. Trees provide food for herbivores in the form of leaves, nuts and fruit, which is carried through the food chain to big Amazon Rainforest animals like jaguar and tapir. Unfortunately, it’s the trees that are being cut down for timber or to make way for farm land. This means many species go extinct, some disappearing before we even knew they existed.

Due to different diseases and its geographic location, the Amazon Rainforest contains an exceptional diversity of trees, which provide abundant habitats for an incredible diversity of different Amazon animals and plants. Back in 1988, in the forests of Iquitos in northern Peru, Alwyn Howard Gentry set the world record for tree diversity recording 300 different species per hectare. Tropical trees are difficult to age as they lack identifiable growth rings, but recently scientists have estimated that Amazon trees can be up to 1000 years old or older.

Here, I will mention some of the largest and most famous trees in the Amazon Rainforest:

We know of the Brazil nut tree (Bertholletia excelsa) from the Brazil nuts. We know them so well that when we hear of their first account it seems strange that something so famous was once an unidentified almond-like seed. From an expedition in 1799, Alexander von Humboldt (an Amazon explorer) wrote about an almond he found saying:

“Their taste is extremely agreeable when they are fresh; but the oil, with which they abound, and which is so useful in the arts, becomes easily rancid. Although at the Upper Oroonoko we often ate considerable quantities of these almonds for want of other food, we never felt any bad effects from so doing.” – Alexander von Humboldt

Harvesting Brazil nuts from the trees requires the conservation of the surrounding forest as without a certain species of Euglossa bee, Brazil nuts cannot be pollinated and won’t produce seeds. The bees in turn require the scent of a certain orchid, as without being covered in the scent male bees cannot attract females. This fantastic play is a symbol of the delicate relationship between ecotourism and the preservation of the rainforest. Brazil nuts are sustainably harvested by many communities in the Amazon Rainforest. One of these operations is near the Tambopata National Reserve, Puerto Maldonado, Peru, where you can stay at lodges like the Posada Amazonas and Refugio Amazonas and visit Brazil nut harvesters.

These trees are among the tallest in the Amazon Rainforest and are named wimba trees (Ceiba samauma). This particular wimba is 55 meters tall. They are a canopy species and hold a special place among many Amazon tribal groups. Potentially fearful of canopy species, tribes like the Tacama (a Bolivian tribe) believe that the trees are home to evil spirits. They believe that passing the trees or cutting them down may cause disease. In a way, if you read more about the link between deforestation and novel diseases, they are right. Perhaps it would help us and 50% of all life on Earth if these beliefs were more widely spread.

The wimba and strangler fig photographs were taken in the Tamshiyacu Tahuayo Reserve where you can enjoy an Amazon Rainforest vacation at the Tahuayo Lodge. Here you can take professionally guided walks in the rainforest, enjoy the canopy zipline, and canoe in the Amazon to find different animals. For family visits, the lodge provides a family guide specialized for leading tours for children and teenagers.

A famous and highly prized rainforest tree, Brazilian mahogany (Swietenia macrophylla) is growing rare in the Amazon rainforest. This species of mahogany is an emergent tree (emerges through the canopy) and grows up to 70 meters tall. The Brazilian mahogany produce a large, hard fruit that mature in the rainy season. The seeds are wind dispersed and helicopter down to the ground. Despite its IUCN status as vulnerable, Brazilian officials in 1998 estimated that 80% of all mahogany production was from illegal logging operations. For more information on the decimation of natural mahogany driven by consumer demand, you can visit swietking.org.

Another canopy species, the lupunas (Ceiba pentandra) are known as kapok trees after the fibre from their seeds, which is used to fill mattresses, pillows, and sleeping bags. This is one of the most common large trees to encounter in the Amazon and is known for its smooth trunk. Kapoks are common along forest edges and rivers. They drop their leaves in the dry season exposing their flowers to bats, which along with several other animals pollinate the white flowers that open just before dark.

The rainforests of South America are strangely similar to the rainforests of western Africa and the link is associated with the break up of the Gondwana continent about 130 million years ago, but dispersal may play a significant role. This species of kapok is also widely distributed in tropical Africa possibly linked to the exceptionally strong winds between Brazil and west Africa. The winds could have carried kapok entangled seeds, or the fruits or seeds may have crossed between continents due to discharge from rivers.

These are the trees that made people rich and grew cities, but resulted in enslavement and even extinction of many Amazon groups. The rubber tree (Hevea brasiliensis) found itself the focus of the rubber boom of 1880 where its gum was collected to make the original rubber for use in tires for bicycles and cars. It remains the main source for natural rubber. Rubber trees are a comparatively small tree and grows to around 30 meters tall.

Trees in the Ficus genus contains about 800 species that have various growth habits. They grow as shrubs, vines, banyans, hemi-epiphytes, epiphytes and free standing species like the one above.

This is a 50 meter tall Ficus tree in the Tamshiyacu Tahuayo Reserve, Iquitos, Peru. This tree shows off the famous buttress root system of rainforest trees. Strangely, the exact function of the buttress roots are still unknown. Theories are that they help stabilize the plant in the thin layer of rainforest soil, or that they provide the surface area to absorb the right amount of water and nutrients in nutrient poor environments like the Amazon.

The relationship between figs and their pollinating fig wasps is a well studied example of mutualism. Fig flowers are enclosed within a type of false fruit called a synconium, which is an urn-like structure containing both male and female flowers. Usually, each species of fig is pollinated by its own species of fig wasp, which in turn can only breed in flowers of its specific host.

Male wasps hatch first from the ovary of a fig flower and find a gall containing a female to impregnate. Females hatch and become loaded with pollen from the male flowers. They then fly off to find another female flower to lay their eggs. When they lay their eggs in the flower, they also pollinate other flowers continuing the cycle. Release of adults from the fig exactly matches the release of pollen from the male flowers in a fantastic example of natural selection. If you’re unfamiliar with the process, you can head over to the Encyclopaedia Britannica to see the image of a fig wasp’s lifecycle.

Strangler figs are fantastic sights in the Amazon. Their sinister life histories should strike fear into the phloem of any well informed tree. They grow as a seemingly harmless epiphyte (from the Greek for ‘upon’ ‘plant’) from the droppings of animals landing on the branches of tall trees. They obtain nutrients from soil pockets in tree holes and cracks on the tree itself. It starts out harmless enough, but then it sends down tendrils to the forest floor wrapping the host tree. The tendrils fuse together when they touch and can form a case around the tree. When the tendrils reach the ground, the fig grows quicker. The fig’s tendrils thicken strangling the host tree, which stops it from growing, so it can steal the sunlight, water, and nutrients. Eventually, the host dies and decomposes leaving behind a haunting case of the strangling fig.

What are your thoughts on Amazon Rainforest Trees? How do you feel about people cutting down a 300 year old tree to make different products? Have you seen any giants of the rainforest? Leave your comments below. 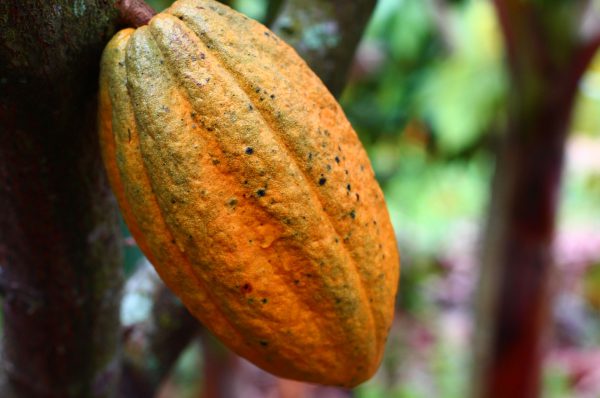